As another day in Venezuela goes by 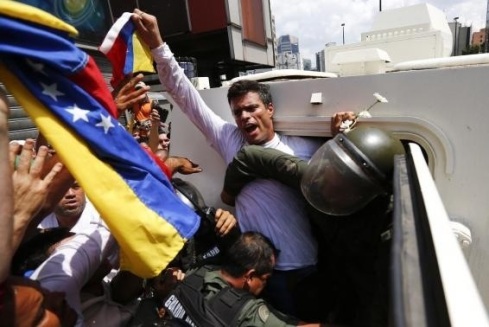 THICK clouds of teargas hung in the air over the north gate of the Central University (UCV) in Caracas on March 12th. A police helicopter clattered overhead; on campus, plain-clothes gunmen on motorcycles, some bearing the initials of the national guard, harassed student demonstrators.

A month after the government crack-down on protesters began, Venezuela’s crisis is deepening. This was the bloodiest single day since three people were killed in Caracas on March 12th. Eighteen injuries were reported at the UCV, after a previously peaceful student march to demand the resignation of the Venezuelan government ombudsman was halted on the orders of President Nicolás Maduro.

But it was the city of Valencia, 125km west of the capital, that bore the brunt of the violence. Three people were shot dead there, including a national-guard officer and two civilians. The government blamed “snipers”; opposition sources insist the only people seen shooting belonged to the pro-government colectivos some are now beginning to call death-squads. The casualties in Valencia brought the month’s death toll to well over 20.

The protest movement began in early February after students and the more confrontational wing of the opposition Democratic Unity (MUD) alliance took to the streets. Their grievances, which are widely shared even by government supporters, include uncontrolled violent crime, inflation and growing shortages of food and other basics. Huge, peaceful protest marches across the country,as well as more violent clashes, often at night, have rattled the government.

Its response has been to jail the radicals’ most prominent leader, Leopoldo López of the Popular Will (VP) party, and unleash violent repression. More than 1,300 protesters, as well as innocent bystanders and journalists, have been detained; many have complained of beatings and ill-treatment. Dozens of cases of alleged torture are being investigated by human-rights groups. Plain-clothes security agents in unmarked cars have begun snatching alleged protest organisers off the streets.

While he wields a baton in one hand, Mr Maduro releases doves from the other. He has launched a so-called “peace conference”, which the opposition has boycotted. It says it will not sit down to talk unless the government gives clear signs that it is willing to mend its ways—which means, among other things, releasing Mr López and other political prisoners, and disarming the colectivos.

As the violence unfolded on March 12th, the Union of South American nations (Unasur) met in Santiago, the Chilean capital, to discuss how to respond to the Venezuelan crisis. Unasur agreed to form a commission of foreign ministers to visit Venezuela, whose task is to “accompany, support and advise”. The strained grammar of the Unasur communique, which reflects underlying political fractures among its members, leaves the reader to guess who is being “supported”.

Mr Maduro certainly seems to have seen the statement as a green light for further repression. He promptly called a meeting of his “security cabinet” and announced “drastic measures” to put a rapid end to the barricade-building and stone-throwing that have disrupted life in every major city in recent weeks. He ordered national-guard commandos to raid residential buildings in Valencia and said security forces would move within hours to arrest the “fascists” and their “suppliers and financiers”. Opposition mayors who fail to stop the protests are also being threatened with legal action.

Unless the Unasur foreign ministers can persuade the government to moderate its stance, their mission will be doomed from the outset. So far, their only achievement seems to have been to encourage the president to act more strongly to snuff out the protests.

Passionate about Marketing, Politics, healthy and active lifetime plus many other topics ;) Follow and discover more. END_OF_DOCUMENT_TOKEN_TO_BE_REPLACED
This entry was posted on Sunday, March 23rd, 2014 at 10:42 and tagged with Caracas, chaos, democracy, dictatorship, guarimba, help, internationalrelations, leopoldolopez, Maduro, mayhem, OEA, politics, protest, SOS, Venezuela, venezuelans, venezuelasos, zello and posted in Global news, International Relations. You can follow any responses to this entry through the RSS 2.0 feed.
« List of fatalities as protests go in Venezuela
When did the protests in Venezuela begin? »