Protest in Venezuela still far from a democratic regime 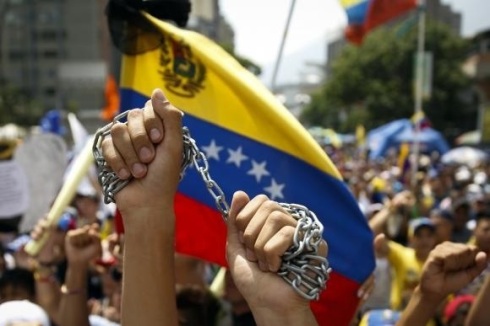 Venezuelan security forces arrested scores of people on Wednesday during a sweep of a busy Caracas avenue as protests against the government heat up amid a widening split within the opposition over whether to back possible U.S. sanctions.

The protest and police response comes as month-old negotiations aimed at easing tensions hang in the balance. The opposition on Tuesday froze talks with President Nicolas Maduro’s government, saying the climate for dialogue was impossible after the arrest last week of more than 200 student protesters who had been camping for weeks outside the offices of the United Nations and three plazas in the capital.

Many political observers believe that by halting the talks opposition leaders were caving to pressure from their own radical base, which is fuming over confusing statements by the top U.S. diplomat to Latin America.
END_OF_DOCUMENT_TOKEN_TO_BE_REPLACED