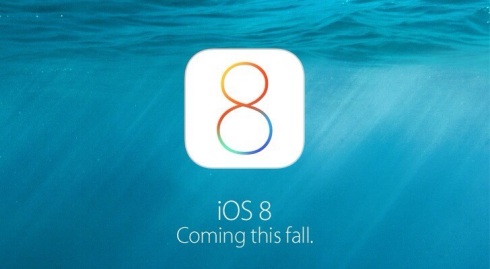 iOS 8 was unveiled at Apple’s Worldwide Developers Conference on June 2. A beta version of the software was made available to developers that same day, with a public launch slated for the fall of 2014.

Improved integration between Apple devices, both mobile and desktop, is a major focal point of both iOS 8 and OS X Yosemite. Apple introduced several new “Continuity” features that are designed to connect the iPhone, iPad, and Mac “like never before.”

AirDrop, Apple’s peer-to-peer file sharing protocol, now works between iOS and Mac devices. Handoff, a newly introduced feature, works on the same sharing principles and lets users start a task on one device and instantly pick it up on another.

Along with sharing tasks with Handoff, iPads and Macs can both place and answer phone calls using the iPhone as a relay. Using this same functionality, Macs and iPads are able to receive SMS messages via the Messages app, which was previous limited to iMessages on those platforms.

The Messages app has new options that let users manage (and leave) group conversations, and the app supports quick voice messages and videos. Typing within Messages and other apps is also much easier, thanks to a new QuickType predictive keyboard. Third-party keyboards can also be installed.

Apple has debuted a new iCloud service called iCloud Drive, which works similarly to Dropbox. iCloud Photo Library, a part of iCloud Drive, has been built into a redesigned Photos app to make all of a user’s photos accessible on every device. Photos has also gained new editing tools, while the Camera app has a new time-lapse mode and a built-in timer.

iOS 8 includes a new “Health” app, which is designed to aggregate data collected from various health and fitness apps. Other apps, like Safari and Mail, have new looks and new features, such as gesture control for the latter.

A major new feature, Family Sharing, lets families of up to six people share apps, music, books, and more, while a revamped Spotlight feature incorporates more search options than ever before.

Apple’s WWDC presentation focused heavily on the way OS X Yosemite and iOS 8 have been designed to work together, with several new features that increase the integration between the two operating systems.

Handoff, for example, lets a user start a task on one device and then switch to another. A person might writing an email on the iPhone, and then pick up where they left off when sitting down at a Mac. A user can browse the web on the Mac and then continue browsing the same website on the go on the iPad.

This feature is enabled automatically, so long as all devices are signed into the same iCloud account. Handoff works with apps like Mail, Safari, Pages, Numbers, Keynote, Maps, Messages, Reminders, Calendar, and Contacts, and it can be built into third-party apps.

iPads and Macs are now able to connect directly to an iPhone’s personal hotspot when it is nearby using a new Instant Hotspot feature.

Integration between iOS 8 and OS X Yosemite allows a Mac or an iPad to make or receive phone calls as long as it is on the same Wi-Fi network as an iPhone running iOS 8. Incoming calls on a Mac or iPad show the caller’s name, number, and profile picture, allowing users to answer or ignore calls. Making a call on an iPad or Mac can be accomplished by tapping on a phone number in Contacts, Calendar, or Safari, and the feature works with an existing iPhone and phone number.

Users are also able to send and receive SMS and MMS messages from a non-Apple device on both their iPads and Macs, a feature that was previously limited only to iMessages.

The app switcher, or multitasking interface, is accessed by tapping twice on the home button. While this has largely remained the same, there’s a new section above open apps that lists both recent contacts and favorite contacts, making it easier to initiate a phone or FaceTime call.

In group conversations, users are also able to share their locations for a set period of time via a new “Send My Current Location” button, and a new attachments section displays all of the photos and videos that have been exchanged in a specific group conversation.

The app now supports voice recordings, which can be captured using a new microphone button and sent via a swipe. Users who receive a voice recorded message can raise the phone to their ear to hear the message. Similarly, video messages can be sent in almost the same way, and watched directly within the Messages app.

Finally, it’s now possible to send multiple photos or videos in a single message instead of requiring a separate message for each photo.

Described as Apple’s “smartest keyboard ever,” QuickType is designed to offer word suggestions while typing. As a user is typing, the keyboard will provide words and phrases that a user is likely to choose next, even taking into account the different writing styles a person might use in different apps like Mail and Messages.

According to Apple, it QuickType adjusts based on the person being communicated with, “because your choice of words is likely more laid back with your spouse than with your boss.”

Apple is also planning to allow third-party keyboards to be installed on iOS for the first time, which will give users systemwide access to popular keyboards like Swipe and Fleksy.

The Photos app has been redesigned to add a new iCloud Photo Library. Every photo and video captured is uploaded to iCloud, allowing users to access and download their photo libraries from any device. It stores photos in their original formats, including RAW files, while keeping a smaller copy on iOS devices.

iCloud Photo Library will keep photos organized into Moments, Collections, and Years, much like the Photos app does now, and edits that are made on a photo will be immediately uploaded to iCloud and visible on other devices.

The iCloud Photo Library feature is designed to allow people to keep their pictures in the cloud while freeing up valuable device space. Due to the increased storage many people will need in order to upload photos to iCloud Photo Library, Apple provides users with 5GB of iCloud storage for free, with 20GB available for $0.99 per month or 200GB available for $3.99 per month.

Apple is also implementing smarter search within the Photos app, making it easier to search through thousands of photos. Searches can be conducted via date, time, location, or album name, with smart suggestions for Nearby, One Year Ago, Favorites, and more.

Passionate about Marketing, Politics, healthy and active lifetime plus many other topics ;) Follow and discover more. END_OF_DOCUMENT_TOKEN_TO_BE_REPLACED
This entry was posted on Sunday, June 15th, 2014 at 18:21 and tagged with fall, hack'news, IOS8, new and posted in Hacks/IOS. You can follow any responses to this entry through the RSS 2.0 feed.
« World Cup 2014 is finally HERE!!!
A chinese jailbreak tool called PanGu »