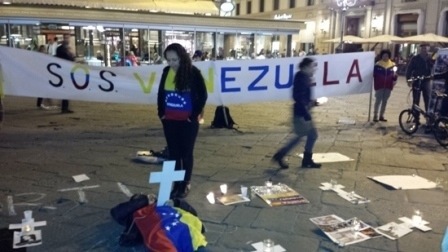 In the early-morning hours of Saturday, March 9, three days before I received the extortion call, two friends — a British man and a Venezuelan woman — were attacked in the street close to my building by a group of six young thugs. The man was able to fend off three of them, but they got away with the woman’s wallet and smartphone, reducing her to tears. Sadly, this has become an all-too-common occurrence in the city.

For now, I have decided that I can no longer live in Venezuela, one of the world’s most dangerous countries. According to the Venezuelan Violence Observatory, a nongovernmental organization, there were 24,763 murders last year, or 79 for every 100,000 inhabitants. The situation has deteriorated so much that the government stopped publishing official figures a couple of years ago.

The government has run the economy into the ground despite the fact that the nation sits atop the planet’s largest oil reserves. Inflation is running at 56 percent. The government budget deficit is more than 10 percent of gross domestic product.

Shortages of basic products such as toilet paper, infant formula, diapers and hand soap are rife. People use napkins instead of toilet paper, even though that is prohibitively expensive for most Venezuelans. Otherwise, they go without, and shower regularly.

Last week I spent a morning going to seven stores just to find shampoo. People line up for two or three blocks just to obtain the ingredients to make their beloved arepa, a flatbread made of ground maize dough or cooked flour. In Mercals, communal grocery stores subsidized by the government, food prices are extremely cheap but the lines are such that people have to spend a whole morning queuing to get the produce.

Salaries are terrible. The minimum wage is around 3,500 bolivares a month, or $54 at the black market rate. One friend of mine works as a public accountant after studying accountancy for four years at university; he earns 7,500 bolivares a month. It is virtually impossible for people like him to afford flights out of the country.

A sense of lawlessness and anarchy seems to be engulfing the country. The middle classes are deeply frustrated by the government, which is seen as inept and corrupt. However, they are also annoyed with opposition leaders who seem to be jockeying for power in any post-Maduro period. Many of the poor just remain confused by what is happening to their country. Chávez divided Venezuela by forever referring to the middle classes as oligarchs and bourgeoisie. Maduro has upped the ante by referring to sections of the middle class as fascist. The level of social resentment is breathtaking.

It didn’t have to be this way. Venezuela is a country of outstanding natural beauty, tremendous resource wealth and a population of 30 million people, the fifth largest in Latin America. It should be one of the most prosperous countries in the region. Instead, it appears on course to becoming a failed state.

Passionate about Marketing, Politics, healthy and active lifetime plus many other topics ;) Follow and discover more. END_OF_DOCUMENT_TOKEN_TO_BE_REPLACED
This entry was posted on Friday, March 28th, 2014 at 11:17 and tagged with clash, dictatorship, freedom, government, repression, struggle, third world., Venezuela and posted in Global news, International Relations. You can follow any responses to this entry through the RSS 2.0 feed.
« Tor proxy on iphone
Best Proxy iPhone Apps in 2014 »